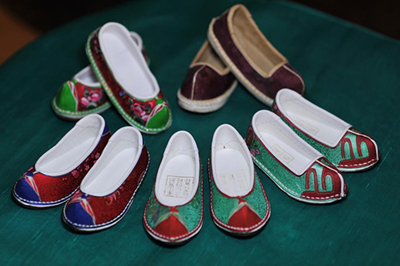 Hwahye are Korean traditional shoes - Hwa is a shoe with a neck, like boots, and hye is a low neck shoe without the height of shoes. And thus, shoemakers are distinguished in two separate crafts, but the two techniques are combined in the modern time into what is called Hwahyejang.

Hwahye making is a family occupation for Ahn Hae-pyo, a Hwahyejang holder, handed down since the end of the Chosun dynasty. His grandfather made Heukhye for noblemen and overseers in the 1880s and his father also made traditional shoes all his life. Ahn Hae-pyo inherited the traditional shoemaking technique from his father in 1962, when he was 12 years old, and launched the business in earnest since 1969. The succession of his tradition genealogy and traditional form has been acknowledged.

All the tools used by his grandfather and father in the 1920s were inherited by him, such as the traditional hwaja delineation, sin delineation, soldelineation, sagudanji, jakdumangchi, singol, awl and needles, Changtturipan, and rulers. He kept them and uses them even today. He is confirmed as a true hwahye transmitter for making traditional shoes, such as Heukhye, Danghye, Eorumhye, Mokhwa, Taesahye, Ahye (shoes for babies for their doljabi), and Jahye.

Ahn Hae-ypo, the holder of Hwahyejang, has a sophisticated craftsmanship in dedicating his life to the tradition in a difficult environment of an industrialized society. His wife and two sons are also transmitters; their techniques are excellent and their collaboration to transmit hwahye making is also noteworthy.

Ahn Hae-pyo is not only keeping the traditional hawhye making method, but is also very clear in transmitting the hawhye technique. He also has his own technique and thus is worthy to preserve his traditional shoemaking technique as a tangible cultural property to transmit, preserve, and promote hwahye making.